Conditions of Participation in Facebook Euro 2016 Competition by OPTIMAL 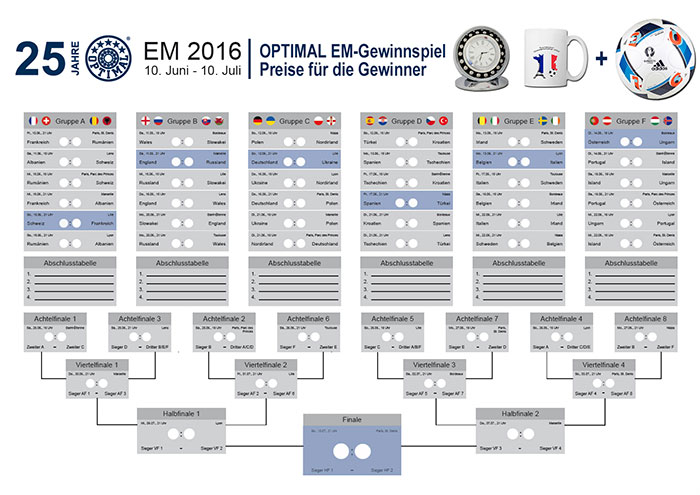 Right at the start of the Euro 2016 will start the Facebook Euro 2016 competition (sweepstake) by OPTIMAL on June 10th 2016. And here are the conditions of participation.

Conditions of participation and data privacy for OPTIMAL’s competition:

OPTIMAL AG & Co. KG (OPTIMAL for short) will be holding a competition on its Facebook business page during the 2016 European Football Championship (Euro 2016) www.facebook.com/optimalgermany.

OPTIMAL will be running individual betting competitions for the ten matches below.

Matches from the round of sixteen to the semifinal:

7)    One round of sixteen match will be chosen as a further competition after 22nd June 2016 once it has been established which teams will be playing against each other.

8)    One quarter final match will be chosen for our competition after 27th June 2016 once it has been established which teams will be playing against each other.

9)    One semifinal match will be chosen for our competition after 3rd July 2016 once it has been established which teams will be playing against each other.

By participating in the competition, the user agrees to the following conditions of participation.

2.1. Each winner of a match bet will receive an OPTIMAL wheel bearing clock as well as an OPTIMAL Euro 2016 mug.

2.2. Whoever guesses the correct result of the final on 10th July 2016 will also receive in addition an original Euro 2016 football as a star prize.

You will usually be able to bet on the ten selected matches on OPTIMAL's Facebook page two days before kickoff in each case. Just the first match (England vs. Russia) will be available for betting on the first day of our competition only (i.e. on 10th June 2016, from midnight (00:00) to midnight (24:00) CEST).

You may participate in the competition if you are over 18 years old and have your own Facebook account.

Participants agree to only send only one bet per competition as a comment, and to also send no comments which contain

We will send the winner a Facebook message (via their comment) and will publish the name of the winner's Facebook account on Facebook. This will normally take place within no more than one week of the match ending (on working days from Mon to Fri).

If the respective winner does not get in contact with OPTIMAL AG & Co. KG by 31st July 2016, the prize will be forfeited. To send you the prize, we require your exact postal address. Please send your address by email to: r.koehler@optimal-germany.com or marketing@optimal-germany.com

Once we have received the postal address of the competition's winner, we will dispatch the prize to the winner. The shipping is expected to start early/mid of July 2016. OPTIMAL will pay the costs of shipping.

OPTIMAL AG & Co. KG reserves the right to change, suspend or end the competition at any time without giving notice and without stating reasons. However, we will only make use of this option in urgent cases, e.g. for reasons of force majeure, for technical reasons (in case of hardware and software manipulation) as well as for legal reasons. OPTIMAL AG & Co. KG shall not be liable for losses, failures or delays which are outside our scope of responsibility. In justified cases, the prize may be replaced with an equivalent prize or prizes.

Prizes cannot be exchanged for cash, nor can prize entitlements be transferred or assigned to other persons. All decisions are final! If individual conditions of participation should be or become invalid, the validity of the remaining conditions shall not be affected by this.

The competition is not connected with Facebook in any way whatsoever and is neither sponsored, supported nor organised by Facebook. This competition is run solely by OPTIMAL AG & Co. KG (see also point 1.).