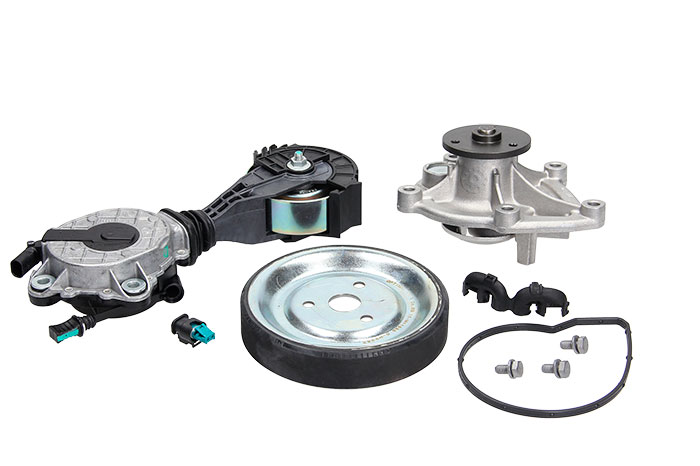 OPTIMAL AG & Co. KG is one of the first car part suppliers to offer complete kits for repairing water pump drive wheels in PSA and MINI (BMW Group) vehicles. The standard version includes a water pump with a seal as well as a belt pulley and matching screws. An all-in-one kit with a friction wheel, electrical connection and connection accessories is also available.

To reduce harmful emissions, the PSA Group and MINI (BMW Group) have developed a unique water pump system. Due to a friction wheel, which can be uncoupled mechanically and electronically, the water pump is only activated when needed. This means that cooling fluid is not circulated until the engine has reached an operating temperature of 103 °C, reducing fuel consumption by around one percent. Furthermore, vehicle safety is increased in winter because the later activation of the water pump results in the passenger compartment becoming warmer more quickly and any snow and ice on the windscreen melting sooner.

During operation, the pressure applied by the friction wheel may cause friction on certain areas of the vulcanised surface of the water pump drive wheel, causing it to wear in places. When the car is being driven, this can be heard as an extremely loud metallic noise that sounds similar to damaged crankshaft bearings. This affects all PSA and MINI 1.6 litre four-cylinder petrol engines with turbocharging and direct injection (105 kW) manufactured from 2006 onwards.

OPTIMAL now offers various water pump kits as all-in-one solutions for this process. The car part supplier, which is based in Langenbach, Germany, also sells individual items for the repair work, such as pulleys for the friction wheel and water pumps with seals.